Instead of surfing this weekend I worked on "fishing." I completed the canoe restoration by installing the seats and second thwart. I had to order a few more parts and they arrived mid-week, so the weekend was spent trimming everything to dry fit, and then sealing up all the cut wood. I also sanded and added another coat of Watco to the gunwales. I had to wait for everything to dry enough to assemble, and by that time it was past noon on Sunday. 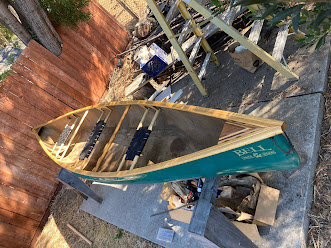 Meanwhile, my 4-year old son was snooping in the unlocked shed and discovered the fishing poles I had brought home from my parents beach house. My parents have several poles decorating the walls of the beach house and every time we go down, my son is reminded that he wants to go fishing. So I grabbed two of the poles and whatever tackle I could scrounge up during one of my solo visits, not wanting my son to know what was in the works. But now the jig was up and he was so excited that I agreed to buy the other stuff that we needed to go fishing. We headed down to the sporting goods store with a list. One of the poles was beyond recovery, but single poles were nearly as expensive as a little starter kit of pole, reel, and a little tackle. I opted for the kit, so now my son has a brand new set-up just for him. On the drive back home I laid the groundwork for fishing next weekend. I explained how there wasn't time to test out the canoe for it's first try after we bought it and to go fishing. My son is to smart for me and laid out a logical argument for not testing the canoe and instead going fishing. He even knew where we could go! Well, he had a point, so we gathered up the tackle instead.

The nearby water is the inner Oakland harbor. Not beautiful, but nice enough. It's saltwater, so the trout rod and tackle we had was ridiculous to be using, but I didn't tell my son that. Instead I rigged it up as well as I could with two salmon eggs, a split shot sinker and small bobber. I cast out a very short distance and had him mind the rod, watching the bobber. Meanwhile I tended to the old rod/reel that was still in working condition. I stripped the 20-year old line and put on some fresh. I got to practice the "fisherman's knot" because I had to rig my son's hook, then I used it to tie line onto my reel. I made every mistake I could, so I had to tie that knot about 7 times. I never even tied a hook to my line because it was getting close to dinner time. We left after only an hour or so at the water. 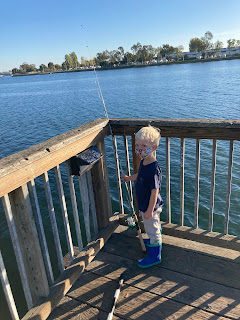 Now I feel like I'm ready for a mid-week surf. Next weekend I want to head to one of the nearby reservoirs and try fishing from the canoe. But the thing is, nobody in our house wants a fish to eat. I'd do it if I wasn't the only one, but I don't care enough to do it myself. My wife doesn't trust food that doesn't come from her favorite grocery store and my son doesn't like anything except chicken fingers and quesadillas. So sounds like we will catch and release all the fish.